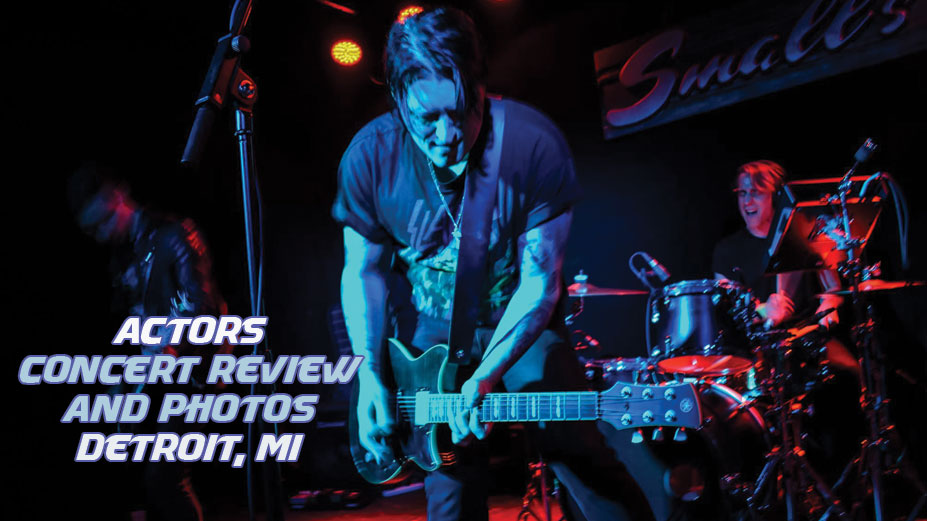 On May 3rd, Small’s in Hamtramck was host to a quadruple threat as four very different bands took to the stage. With their blended gothic-industrial and post-punk sound, Detroit’s own Schedule IV kicked off the night with a performance as vibrant as vocalist Steph Strange’s bright hair; using elements of noise and disjointed melodies, they illustrate what’s exciting about each genre they represent. With deliberate anarchy, melancholic lyrics, and a spirit as eclectic as the Motor City scene itself, Schedule IV are artists worth investigating. They will be playing Cellarmen’s in Hazel Park on June 22nd, and we highly recommend checking them out.

Our proximity to Chicago has brought many fantastic artists up from the Windy City, and we were pleased to welcome The Bellwether Syndicate here in support of their newest single, “Republik”, which is currently available on Bandcamp. William and Sarah Rose Faith are familiar paragons to those who have followed the gothic punk music scene for the past two decades, joined in this project by Philly Peroxide on percussion and keys and bassist Paul Sin. With thunderous energy and obvious passion for their message, The Bellwether Syndicate embodies the polished ferocity of the avant-garde. They are a dynamic live presence, wreaking their sonic havoc and defying genre norms even as their sound reveres all that came before it – and they look stylish doing it, too. Following an appearance at Wave-Gotik Treffen in Germany this summer, they’ll embark on a few more Midwestern dates in November.

The Bellwether Syndicate is a tough act to follow, but Brooklyn natives Bootblacks were well prepared for the challenge. A strange, kinetic hybrid of contemplation and gleeful abandon, they are feverishly fun to watch, bringing a building sense of urgency into the elastic stretch between darkwave and post-punk. Expressive vocalist Panther MacDonald lithely bounces in and out of lyrical reveries, channeling the lightning energy of communal sound and lighting every corner of the stage. The rounded vigor of Alli Gorman’s guitar work combines flawlessly with the deeply distinctive esoteric warmth of Barrett Hiatt’s synths, creating a unique and thrilling mix of pulsing affective energies. Their forthcoming full-length album, Thin Skies, will be released on Artoffact Records following a smattering of more live dates, including an appearance at Absolution Fest in Tampa, Florida, this October.

Headlining for the evening was ACTORS, a Vancouver-based quartet whose debut full-length record, It Will Come To You, has been taking the indie music scene by storm since its release in 2018. And it does indeed seem to be coming to them, as their live performances have been turning up sold-out venues and a lot of word-of-mouth hype – deservedly so, as they are of a singular body onstage, a well-oiled machine build on rhythm, melody, and empathy. Each member of ACTORS is adept at their part of the whole, but it is together that they shine brightest, with camaraderie and mutual affection that is palpable. Musically, they are full-on post-punk, capably and joyfully mixing lush guitar melodies with percussive strength, marrying a darker sort of pop sensibility to a heartfelt, soaring sound.

Front-man Jason Corbett leads his team of ingénues with obvious relish, hamming up his performance and connecting to the audience even as he’s losing himself in the moment. He is a puckish rogue, and the pure love he so clearly has for what he does is infectious. Just a few feet away, bassist Jahmeel Russell creates the heartbeat by which this trickster dances, creating a powerful glue that holds the melodies together. Drummer Adam Fink, a man Corbett has called his “moral center”, grounds the rhythm and keeps time with artful precision. Fluttering over, under, and through each song’s framework are the synths, with the talented Shannon Hemmett at their helm, a punky pixie with the voice of an angel. ACTORS are simply just a lot of fun to watch, mainly because they are so obviously enjoying themselves so much and are eager to bring happiness to the crowd. To be in an ACTORS audience is to join the band for an hour or two, and it’s definitely a party you don’t want to miss.

ACTORS will join Bootblacks at Absolution in early October, and will commence with another tour thereafter, including another stop in at Small’s on October 18th – so don’t miss them! Jason Corbett hints that some new material will be in store, and with Shannon Hemmett’s LEATHERS project off to a promising start as well, this is definitely a band to keep an eye on.