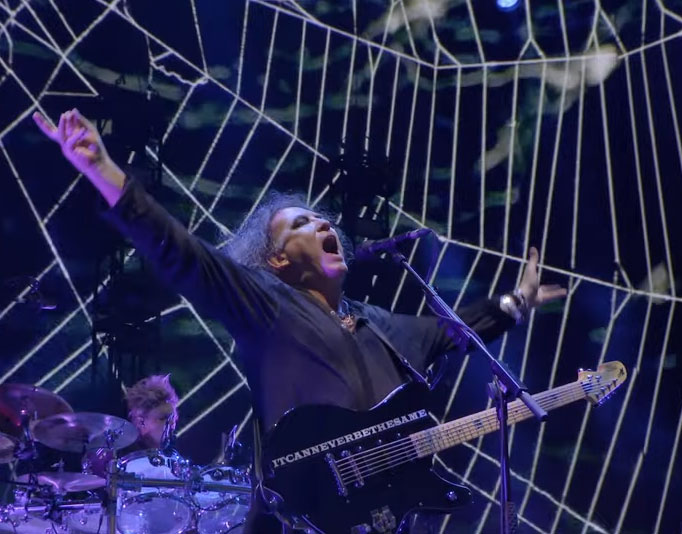 Yesterday I had the pleasure of seeing the new concert film from The Cure titled Anniversary 1978-2018 Live In Hyde Park. The concert was beautifully shot by Tim Pope who has directed over 37 videos from the band including Let’s Go To Bed, Close To Me, Just Like Heaven, Friday I’m In Love and more. He was also the mastermind behind their previous concert film, In Orange.

The anniversary concert clocked in at about 2.5 hours and it featured selections from the bands rich catalog. The concert starts off with a punch, wasting no time with Plainsong, Pictures Of You, High, A Night Like This and The Walk. The concert was filmed outdoors and there was still a bit of daylight left for the first few songs. As the concert progressed, it got darker out and that’s when we were treated to an electric backdrop with the light show and visuals.

One of the great things about seeing the movie is that you get to be up front and personal with the band members. The show spent plenty of time with each member of the band, but seeing Robert Smith up close gives you even more of an appreciation for him. He was very emotive and playful throughout the show. My personal favorite selections from the concert were A Night Like This, Push, Disintegration and Shake Dog Shake.

Video Clip from the show