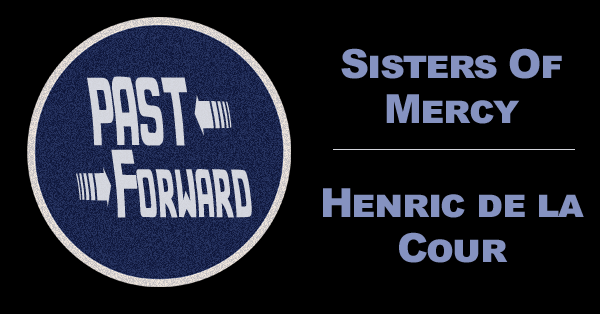 Past Forward celebrates how modern music is influenced by classic songs and performances from the past. This week we feature the music of the swedish Dark Wave / Post Punk / Goth singer Henric de la Cour with his single Two Against One. Henric got his start with a group called Yvonne. After 4 albums with the group and a brief stint with a group called Strip Music, he branched off into a solo career. His second solo album, Mandrills, included the song Grenade that was featured prominently on Strangeways Radio when it was broadcasting. Now, Henric is back with his thrid album Gimme Daggers which features the fantastic singles Worthless Web and Two Against One. Henric is known for his dark, emotional lyrics and an equally dark persona.

Two Against One immediately reminds you of the Sisters Of Mercy classic More. You can hear the resemblance and would be tempted to segue the chorus of “Bright Lights Bright Lights Here I Come” with Sister’s “And I need all the love I can get” . If you are fan of Sisters Of Mercy we definitely think you will enjoy the work of Henric.

Listen for yourself and see if you can hear the influence.