Book Review: How Soon Is Never? 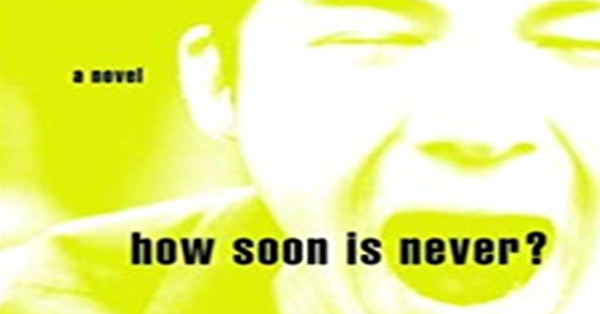 We all have a favorite band that we wish would reunite, right? Sometimes it is realistic, sometimes it becomes reality and sometimes it is pure fantasy. Have you ever fantasized about being the one to make it happen? That is the crux of How Soon Is Never by Rock journalist, Marc Spitz. Spitz was a Senior Writer at Spin and Vanity Fair and contributor to publications including The New York Times, Maxim, Blender, Harp, Nylon and the New York Post.

The novel opens with a young Joseph “Don’t Call Me Mean Joe” Green, struggling with the cultural baggage of his name and simply finding where he fits in the world. In the perfectly opening chapter, “Hello, I Am The Ghost Of Troubled Joe”, we meet a shy, Reagan-Era Long Island youth living with his Mom Susie who ships him off to Lexington, Kentucky for a summer with his cokehead, hippie Father, Sid. One day that summer, an unassuming Joe stumbles into a Lexington record shop with Hall & Oates blaring out his Walkman. He walks out a changed person, his head dizzy with The Ramones, Lou Reed, Dead Kennedys, The Clash and Depeche Mode. He also discovers a burning passion for the Punk Rock salesgirl Jane, who teaches him not only an appreciation for Punk and New Wave, but Sex, Drugs and Fashion.

Back in Long Island for the new school year, Joe falls in with a group of Art Room misfits, who mostly sit around listening to WLIR eagerly anticipating a song called Hand In Glove by this mysterious new band called The Smiths. Joe becomes obsessed, even venturing into Manhattan to buy a Smiths T-shirt without having even heard the band. When he and his friends do finally hear the glorious sounds of Johnny Marr’s trembling, shimmering guitars and the poetry of Morrissey, singing bout the ‘sun shining out of their behinds’, their lives are forever altered.

So begins a lifelong relationship of ups/downs, love/hate between a boy/man and the only band that ever mattered. The Smiths play a pivotal role in every friendship and romantic relationship through adolescence, Art School and beyond. Flash forward to 1995, it is pre-Internet boom, and Joe lands a job as a Rock journalist at Headphones magazine. At age 30, Joe is already living a Rock & Roll lifestyle, hanging out late with kids half his age, sleeping with random young girls and fueling himself with drugs to keep it all going. That’s when, sporting a classic Smiths T-shirt, he meets a fellow headphones employee. Miki, is simply the most stunning person he has encountered, vauguly Far East-looking (prompting the obvious reference to Miki Berenyi of Lush), they bond over the Smiths.

One alcohol-fueled post work evening, the pair come up with their fantasy feature story, to REUNITE THE SMITHS! After convincing their editor to bankroll this scheme, Joe and Miki traverse Manhattan, Los Angeles and Manchester in search of their Fab Four. Their mission is to get Mike Joyce and Andy Rourke on tape first, declaring their interest in a reunion. Then, taking these tapes to Johnny Marr and Morrissey.

Can they actually convince this band, splintered by litigation to once again find the love, friendship, and chemistry they once had? Can Joe and Miki ignore the smoldering passion between them? Can Joe survive his self-destructive behavior, lifestyle and dangerous nostalgia for this band?

It is a fascinating story that feels so real to us, but it is in fact, Fiction. However the book concludes with a real interview that Spitz conducted with Morrissey for Spin magazine in 2004. The 30+ page transcript covers Morrissey’s new (at the time) LP, You Are The Quarry, the current state of Pop music, The Smiths and How Soon Is Never

Morris Day authors memoir of The Time and his relationship with Prince
March 7, 2019

Book Review: This Will End In Tears – The Miserabilist Guide To Music
February 18, 2019